Analysis: It’s time for action after COP25 stall. The world is waiting.

Updated by Peter Shawn Taylor, Special to the Canadian Energy Centre on December 20, 2019, 9:14 am MST 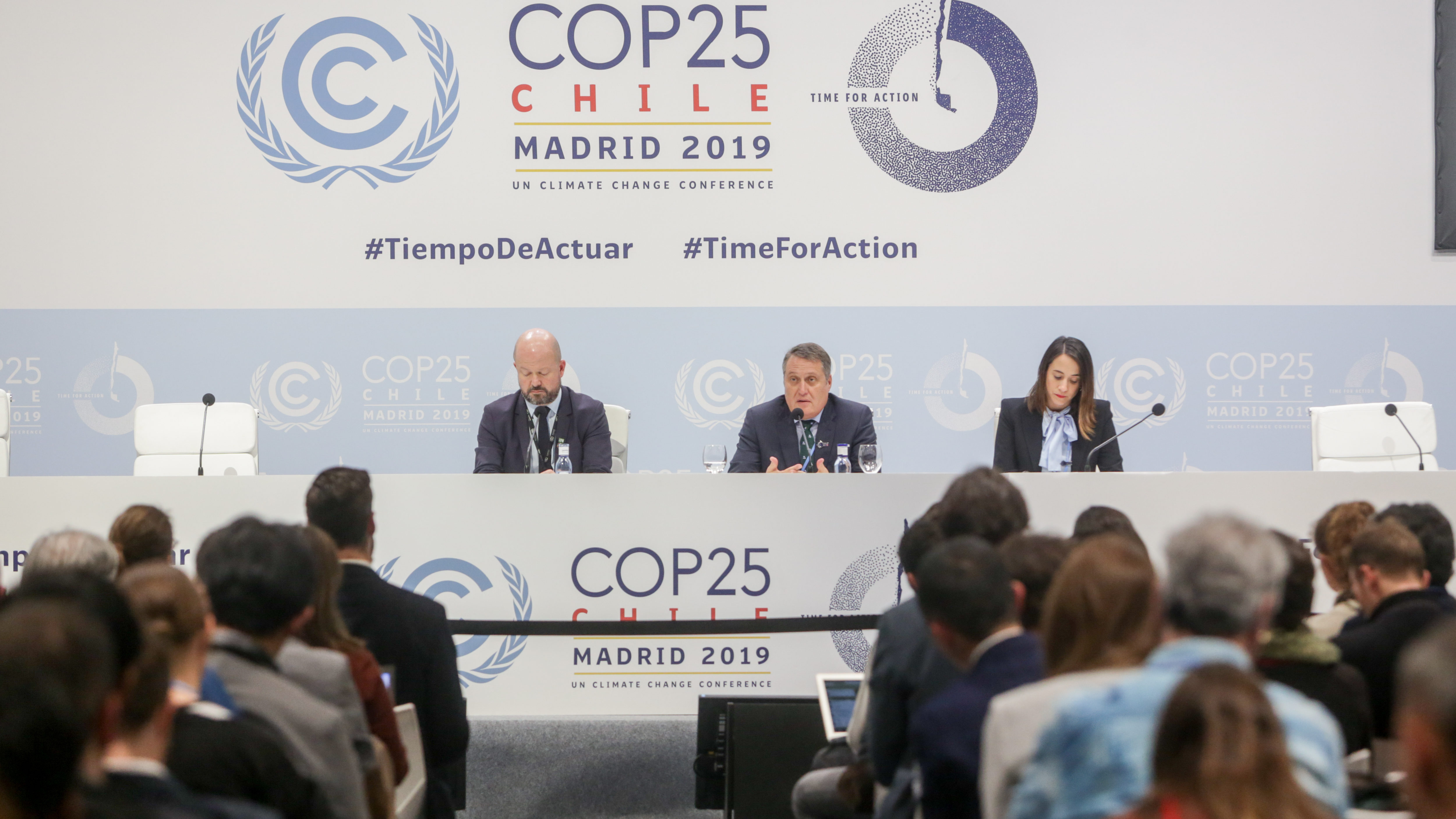 The coordinator of the COP25 Presidency, Andrés Landerretche (c), offers a press conference representing the Chilean Presidency on the state of the negotiations, during the last day of the Climate Summit (COP25) held in Ifemaon December 13, 2019 in Madrid, Spain. (Photo by Ricardo Rubio/Europa Press via Getty Images)

Does the Earth care about accounting rules? Of course not. What the Earth presumably cares about is that we make real progress addressing climate change by cutting global greenhouse gas (GHG) emissions.

Unfortunately, when representatives from around the world met in Madrid for the UN Climate Change Conference COP25 earlier this month, they got hung up on arguments over obscure accounting rules and failed to deliver the breakthrough deal everyone had been hoping for. This is particularly bad news for Canada, given that we have so much to offer the world when it comes to reducing global emissions.

COP25 had one major goal: produce an agreement on Article 6. Some delegates in Madrid were even spotted wearing badges declaring “All I want for Christmas is Article 6.” Yet when the talks ended on Dec. 15, the result was a lump of coal in everyone’s stockings. The only agreement reached was that they’ll try again at COP26 in Glasgow in November 2020 – almost a year from now.

So what exactly is Article 6? And why is it proving so bothersome?

Article 6 is the only portion of the 2015 Paris Agreement not yet settled by participating countries. It consists of a mere nine paragraphs proposing how countries can cooperate to reach their own national GHG targets and, in doing so, contribute to lowering global emissions. This comprises three different ways for countries to come together: through bilateral trade agreements, an international carbon market, and by providing development aid that directly finances climate change measures in a recipient country.

Reaching an agreement on how countries can work together in these ways is a crucial component to fighting climate change. Canada is among several countries, including Japan, South Korea, New Zealand, Norway and Switzerland, to propose the use of international credits generated under Article 6 to help meet their national emissions targets.

But for all this to work, member countries have to agree on how they will track and record their cross-border efforts. One major sticking point concerns “double-counting”. If a rich country funds an emissions reduction project in a poor country or trades for credits, who gets to count the drop in emissions – the donor or the host? Or should it be split 50/50? Brazil is reportedly the biggest obstacle to reaching a deal in this regard, as it wants to leverage its massive Amazon rainforest as both a source of domestic emissions targets, and a destination for international funding. Additional problems have arisen from groups demanding human rights protections be written directly into these international agreements.

Regardless of the principles at stake, however, squabbles over accounting techniques and other issues holding up an Article 6 agreement are doing real harm to the environment by delaying the potentially massive improvements to global emissions that will arise from a fully functioning system of climate change cooperation.

Harnessing international trading and collaboration will allow countries to meet their GHG targets in the most cost-effective manner possible, a crucial factor in the politics of climate change. According to a report by the International Emissions Trading Association (and partly funded by major oil and gas producer Chevron), unlocking these benefits could lower the overall cost of hitting all national targets under the Paris Agreement by a stunning $250 billion (US) a year by 2030.

A completed Article 6 holds special significance for Canada. As a relatively small country when it comes to GHG emissions, our ability to affect global change by staying within our own borders is quite limited. Since we account for just 1.6 per cent of total GHG emissions, even if we went to zero tomorrow, it would have an almost insignificant effect on the world’s total carbon budget. However, applying Canadian resources, regulatory standards and technology to the rest of the world holds the promise of a far greater impact on climate change.

As others, including Grady Semmens and Zsolt Vigh, have argued on this site, shifting other countries away from dirty coal-fired electricity to cleaner-burning Canadian natural gas is one way Canada can make a huge difference far beyond its shores. According to the Canadian Association of Petroleum Producers, replacing all the new coal-based power plants planned over the next two decades in China, Southeast Asia and India with natural gas would eliminate 1,500 megatonnes of GHGs per year – twice Canada’s current total. While critics tend to focus on the emissions created by the production and shipment of natural gas within Canada, they overlook the massive global benefits it will unleash.

Amid all the battles over double counting and other book-keeping impediments, we need to recognize what’s really important. The Earth doesn’t care about Article 6. Countries should stop fighting over it and get on with what really matters.

Peter Shawn Taylor is a contributing editor at Maclean’s, columnist with the Waterloo Region Record and senior features editor at C2C Journal.