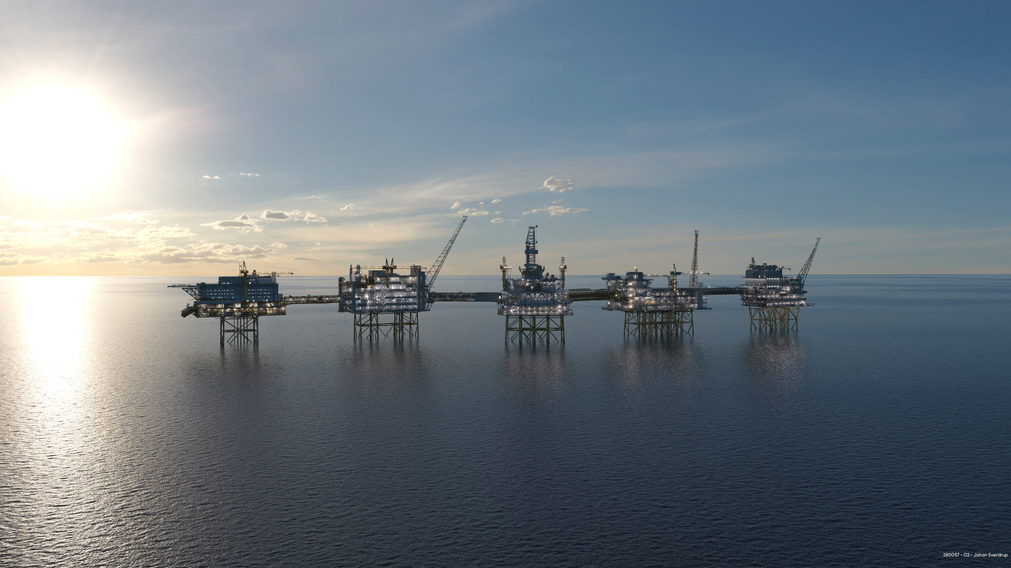 A series of oil platforms that are part of the Johan Sverdrup oil extraction project, the biggest field development on the Norwegian continental shelf since the 1980s. Photograph courtesy Equinor

This week’s decision by Norges Bank Investment Management to stop investing in four of Canada’s largest oil sands players because of concerns about greenhouse gas (GHG) emissions is misinformed at best.

The $1 trillion fund was created based on revenues from Norway’s offshore oil industry, which continues to thrive. The announcement to divest from Canada comes as production at the massive new Johan Sverdrup project operated by Norway’s state-owned oil company Equinor is expected to reach 470,000 barrels per day ahead of schedule. That’s larger than any existing oil sands project.

Canada’s oil sands industry is regulated and developed to balance environmental protection with economic and social benefits. In the case of GHG emissions and environmental issues, the sector is a leader in its commitment to improving performance, governance and transparency.

The oil sands industry continues to build on its long track record of improving GHG emissions intensity as new projects are brought online.

In 2014, analysis by IHS Markit using 2012 data found the GHG emissions per barrel from oil sands production to already be within the range of other crude oils refined in North America. The trend has continued to improve. In 2018, IHS Markit found that average oil sands emissions intensity had dropped by approximately 14 per cent since its original study. Overall, researchers found that oil sands average emissions per barrel decreased by 21 per cent between 2009 and 2017.

“On average, upstream emissions [intensity is] one-fifth lower than a decade ago and could fall another approximately 20 per cent over the coming decade. On a full life-cycle basis, this would bring the industry closer to the US average. However, averages do not capture the entire picture, with some facilities already at or near the US average today,” IHS Markit said.

Researchers acknowledged the study did not include some potentially transformational technologies, even though many are advancing, which may indicate greater potential for GHG intensity reductions in the future.

Canada’s oil sands producers have achieved success decreasing the emissions intensity of their barrels, and are now setting targets to reduce their total footprint.

“Climate change is one of the most pressing challenges we face as a global community. A big part of that challenge is about how we best produce and consume the energy the world needs while reducing the GHG emissions that contribute to climate change, all as we continue generating social benefit,” Suncor Energy CEO Mark Little said in the company’s 2019 Climate Risk and Resilience Report.

Together, Canadian Natural Resources, Suncor, Imperial and Cenovus are responsible for more than 75 per cent of current oil sands production and, as such, the vast majority of Canadian oil production.

Canada’s oil sands producers include climate risk in their decision-making processes at the highest levels. Suncor Energy, for example, says it considers climate risk to be one of its principal risks. As such, it undergoes a regular board of directors review. The same is true of Canadian Natural Resources, Imperial Oil and Cenovus Energy.

At Canadian Natural, 7 out 12 board directors have relevant experience in the area of climate change (carbon policy and emissions). Cenovus says that it is critical for its board members to “understand how climate change related risks relate to our company, the industry and our regulatory environment.” Imperial’s management committee, which includes the chairman of the board and the CEO, “ensures that all risks, including climate risks, are addressed throughout the company.”

Among other transparency programs, these four companies all report public documents that align with recommendations from the Task Force on Climate-Related Financial Disclosures. This voluntary program seeks to develop consistent climate-related financial risk disclosures for use by companies in providing information to investors, lenders, insurers, and other stakeholders.

In 2007, Alberta was the first jurisdiction in North America to introduce a price on carbon and mandatory GHG emission reduction targets on large industrial emitters. That levy funds development of new and cleaner technologies that reduce emissions, like improved oil sands extraction methods and research and investment in carbon capture, utilization and storage.

Now known as the Technology Innovation and Emissions Reduction (TIER) program, Alberta’s system has been approved to meet the Government of Canada’s stringency benchmark going into 2021.

It is important to note that oil production from Canada contributes little to global CO2 emissions. In 2014, Canada’s total share of the world’s CO2-equivalent emissions was 1.6 percent, according to the most recent data calculated by the World Resources Institute, which is used by Environment and Climate Change Canada (ECCC).

The oil sands industry does, however, provide significant economic benefits to Canadians. According to the Canadian Association of Petroleum Producers, the oil sands alone provided 205,000 direct and indirect jobs in 2017, $1.9 billion in GDP in 2019, and $3.2 billion in supply chain spending with more than 2,000 business across the country in 2016/17.