The world’s largest pipeline project to capture and permanently store carbon dioxide emissions from human activity is on track to begin operating this summer.

Final commissioning is underway on the Alberta Carbon Trunk Line, a 240-kilometre pipeline that will transport CO2 from an oil sands refinery and a fertilizer manufacturing plant near Edmonton to a facility near Red Deer where it will be pumped deep underground.

The first phase of the project is expected to permanently sequester up to 1.8 million tonnes of CO2 equivalent annually, or the impact of removing approximately 339,000 cars from the road. At full build-out, the project is expected to safely remove 14 million tonnes of CO2 emissions per year, the equivalent of removing 2.5 million vehicles from Canada’s roads. As an added benefit, the captured CO2 will extend the life of oil and gas reservoirs in central Alberta for up to 40 years, providing additional jobs and tax revenues for communities for decades to come.

“This is truly a sustainable, low-carbon energy solution the world is looking for,” says Kevin Jabusch, President and CEO of Enhance Energy, the company that will utilize the CO2 to enhance recovery of conventional crude oil. “Our oil production will be at least 60 per cent less per barrel on a wells-to-wheels basis.” 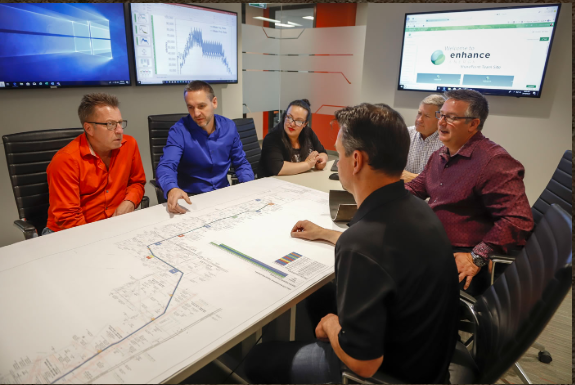 The company has taken the necessary steps to protect worker safety during the COVID-19 pandemic as it fills the pipeline with CO2 and completes work on the facilities that will inject the greenhouse gas into geologic formations two kilometres below the surface. Adding large volumes of CO2 to the conventional oil field at Clive, Alberta unlocks more oil than would normally be accessible from the reservoir.

“The CO2 acts like a solvent – it mixes with the oil and allows it to move,” Jabusch said.  “And at the end of the day, the CO2 stays in the reservoir and is permanently sequestered, which essentially reduces our greenhouse gas emissions.”

The project has been under development for more than a decade and has been supported by the federal government’s Clean Energy Fund and the Government of Alberta. It is one of two commercial-scale carbon capture and underground storage (CCUS) projects underway in Alberta to reduce greenhouse gas emissions related to the oil and gas sector.