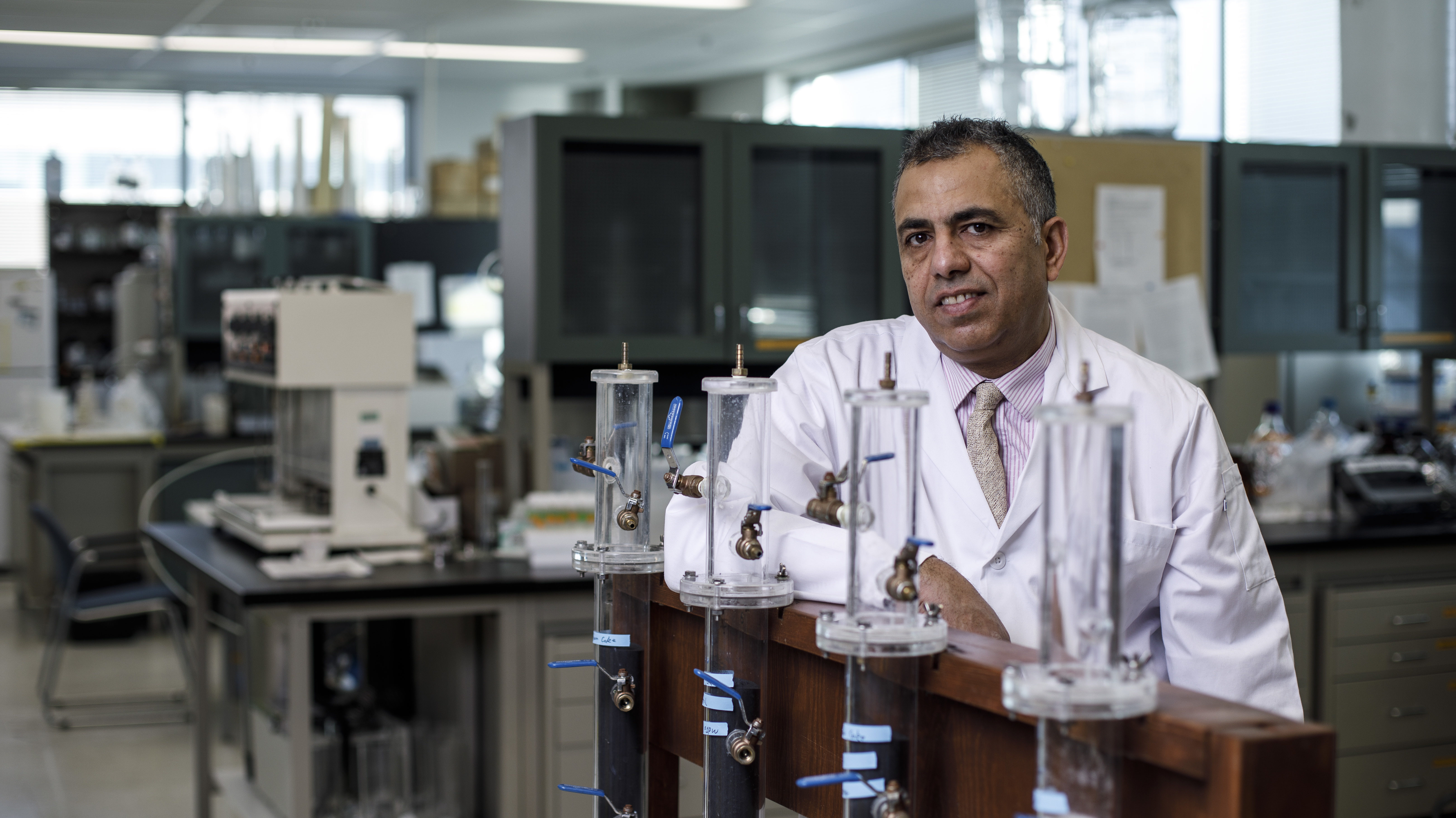 Mohamed Gamal El-Din gets a kick out of the fact that his three sons, aged 9, 13 and 14, ask him some unusual questions.

As a civil and environmental engineer and Industrial Research Chair at the University of Alberta, he’s glad they aren’t just inquiring about stereotypical adolescent topics, like cartoons and video games.

“They ask me if I’ve solved the problem of naphthenic acids, and that’s something only scientists would know about,” he says. “I tell them I’m still working on it.”

Naphthenic acids are one of the main contaminants in water that has been used in the oil sands process. And Gamal El-Din is indeed still working on it.

Along with fellow U of A researcher Lei Zhang and Yanyan Zhang in the department of civil engineering at New Mexico State University, Gamal El-Din recently authored a paper detailing a new approach for cleaning and decontaminating oil sands process water.

Published in the August issue of Science of the Total Environment, the paper suggests that a method previously used to treat pharmaceutical waste water could also remove naphthenic acids from oil sands process water. The system, which infuses water with oxygen atoms in a technique known as ozonation, could dramatically speed up the time it takes to clean up contaminated water, which would enable reclamation to occur more quickly.

The amount of water used to extract one barrel of bitumen varies. According to NRCan, three to four barrels of water are used during surface mining; in situ – or drilling – processes use an average of 0.4 barrels. NRCan notes that most water used in oil sands development is recycled back into the process – 80 percent for established mining operations and approximately 94 percent for in situ recovery.

In mining, the process-affected water, which contains several organic compounds and heavy metals, is then typically stored in engineered dam and dyke facilities called tailings ponds, where it can take decades to naturally regenerate. The Alberta government estimates that almost one trillion litres of oil sands process water was stored in tailings ponds in 2013.

Multiple technologies and processes are under development to remediate oil sands process water and to reduce the industry’s tailings footprint.

Gamal El-Din and his colleagues believe they can use the ozonation technique to cut the cleaning process down to a matter of minutes, from decades.

He is planning to field test a similar technique this spring in a constructed project that will simulate a wetland.

“It’s not going to be just a big hole in the ground,” he says. “We’re going to engineer it in a way that adds material to it … and make use of these systems in a way where we don’t have to use a lot of energy” to cleanse the water.

Gamal El-Din’s work is being supported by a number of government agencies including the Natural Sciences and Engineering Research Council of Canada and Alberta Environment and Parks. A number of major oil sands operators, including Suncor, Syncrude, Canadian Natural Resources, Imperial Oil and Teck have also helped with the funding. Gamal El-Din’s work is also supported by Canada’s Oil Sands Innovation Alliance (COSIA).

Operators are under increasing pressure to clean up the water used in oil sands production, which is why they are investing in multiple lines of research and technology.

Syncrude, for example, in 2019 began a large closed-circuit pilot that uses petroleum coke, a byproduct of the bitumen upgrading process, to treat process water. The technology removes solids such as clay as well as hydrocarbons and dissolved organic compounds, including naphthenic acids.

Comprehensive testing of the process is planned for this year, which will help inform provincial and federal regulators as they work to establish regulations for safe return of treated oil sands process water into the Athabasca River. There is zero release currently allowed.

Syncrude’s work using petroleum coke as a filter has produced water so clean and clear it supports fish species like rainbow trout.

COSIA believes that Syncrude’s research findings have the potential for the entire industry when it comes to safely returning treated water to the environment.

Warren Zubot, senior engineering associate at Syncrude – who “discovered” the technology in 2005, has worked with Gamal El-Din previously and says his ozonation research is nearly ready for prime time. Combined with other efforts like the coke cleansing technique, he believes the oil sands industry is getting closer to reaching some breakthroughs in water treatment.

“A lot of his activity has significant potential to move to the field pilot stage, which would then be a step toward potential commercialization,” Zubot says. “In all likelihood, there won’t be one silver bullet technology for treating water for a safe return. It will be an array of technologies that will depend on a site operator’s specifics.”

For his part, Gamal El-Din is hoping for a breakthrough that will satisfy his children and their relatively advanced scientific curiosity.

“At the end of the day, I’m an engineer, and engineers, we aim to solve problems,” he says. “I like to see my research impacting society. I hope my work will be appreciated some day.”