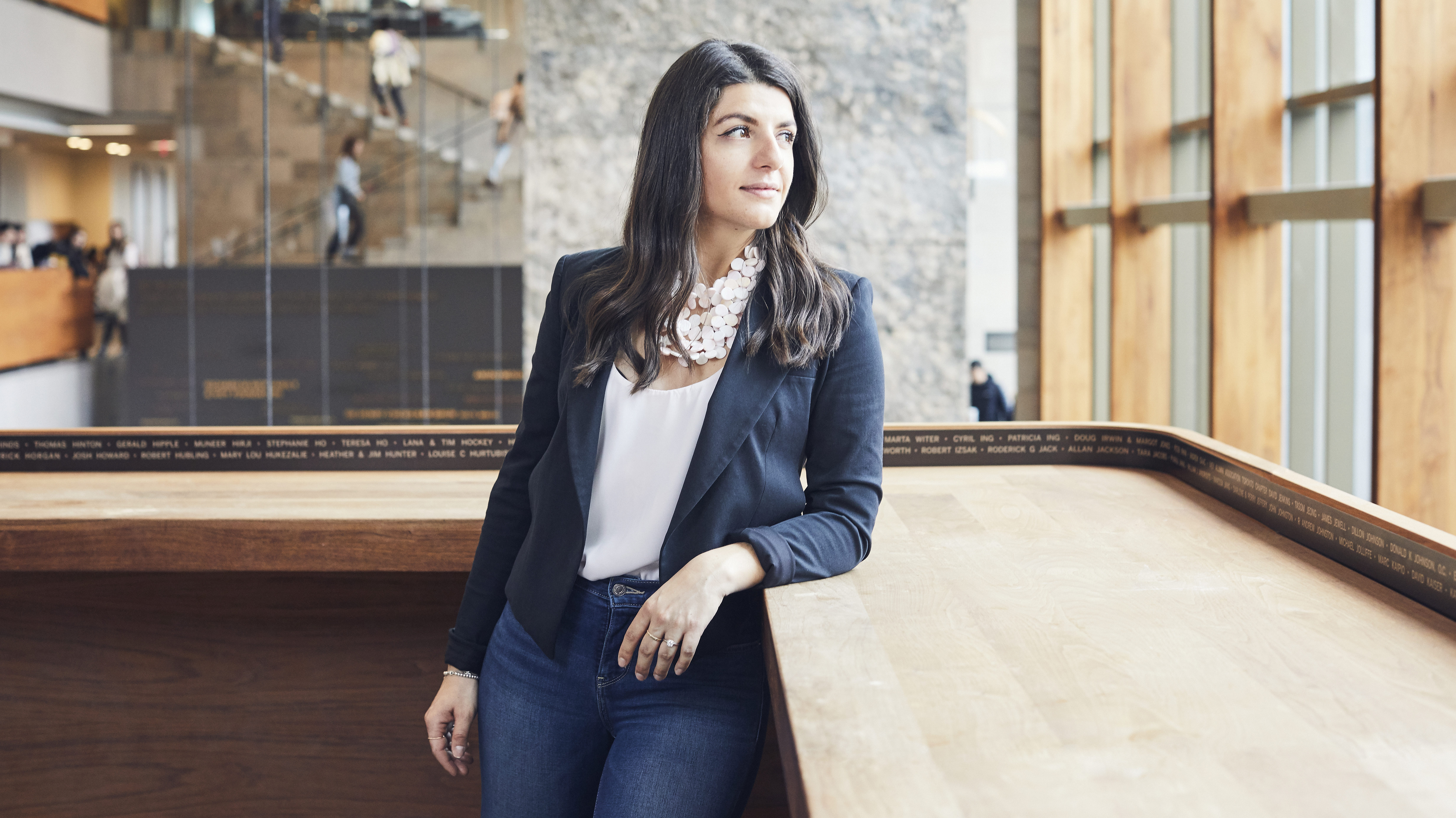 Daniela Barros at the Richard Ivey School of Business at Western University in London, Ont. Photograph for Canadian Energy Centre

An MBA candidate at Western University’s Ivey Business School, Barros moved from Calgary to London, Ont., last spring. But, as vice-president of the MBA Energy Club, this engineer is still connected to the industry she worked in for seven years and is especially proud of its innovative bent.

“I absolutely believe the energy sector is innovative,” said the 31-year-old on a recent November afternoon, just after writing an exam on financial markets and derivatives. “In Canada, where we have some of the most stringent and progressive environmental, safety and social governance regulations on the planet, we still manage to compete globally, which is a testament to our ability to innovate.”

She also believes the energy sector is a great place for engineers like her to start building their careers.

“The industry has been very good at creating rotational training programs for young engineers to experience different jobs during the early years of their careers,” she says. “These programs can expose you to global, large-scale projects, something that’s not common in other industries.”

For instance, in her seven years with Calgary’s TC Energy, Barros worked on the first liquid natural gas pipeline project in Canada, travelled to Mexico as part of the company’s business development team, and had roles where she helped deliver multi-billion-dollar projects.

“I’ve had great opportunities in the industry,” she says. “These experiences have helped me during my MBA and will continue to serve me well in the future.”

At first glance, Calgary’s energy sector might not have seemed like a natural fit for this mechanical engineer: She wasn’t big into hiking or skiing. She studied engineering at Montreal’s McGill University, and later found she was a minority in Calgary among graduates from the University of Alberta, the University of British Columbia, Western University and Queen’s University. She had one uncle in Calgary, but her parents lived in London, Ont., and other relatives were in Colombia, her birth country, which she left at age 14. She had never been to the western city until a summer internship, right after graduation, initiated her.

“I thought it was going to be a small town with nothing to do,” said Barros, who began work with TC Energy as an intern. Formerly Trans-Canada Pipelines Ltd., the company develops and operates energy infrastructure in Canada, the United States and Mexico. “It was a huge surprise to me that it’s such a cosmopolitan city.”

After her internship, Barros spent a few months travelling with a friend. By the time she was done, her boyfriend (now fiancé) had accepted a job in Calgary, so Barros decided to join him there. Within a week, she had been hired, full time, by TC Energy.

If moving to Calgary was a surprise twist in Barros’ life, becoming an engineer had been in the cards practically since birth. Her father was an engineer in Colombia and continued in that career when he moved to Canada and her mother, an economist, was also strong in STEM (science, technology, engineering and math). In high school, math came easily to Barros, and she enjoyed it. She chose mechanical engineering as her course of study because of the breadth of that particular discipline, she said, compared with other fields of engineering.

Working at TC Energy also provided breadth, giving Barros the opportunity to rotate through several different teams as a junior engineer and then to work outside of Canada, using her native Spanish combined with all the other skills she had honed to that point in her career.

As a female engineer, Barros felt welcomed by her colleagues, whether she was working on a construction site, which tended to be male-dominated, or a consultation or management project, where teams were often equally divided by gender.

“Sometimes it felt weird to be one of the few women around, but I’m an engineer and I’m used to it,” she says.

Barros, who left Alberta in 2018 and started the MBA program in 2019, is very appreciative of what she learned during her time as part of the province’s energy community. She was a member of the Young Pipeliners Association of Canada and the Engineers-in-Training group at TC Energy, both of which helped enhance her career.

“I didn’t know anything about oil and gas before I started working there, but working there, you really understand, at a high level, how Canadians use energy and what we need to do to produce it,” she says. “It was all a huge eye-opener for me.”

As she embarks on the next stage in her career, scheduled to finish her MBA in March 2020, there are sure to be many more eye-openers in Barros’ future. She’s not sure if Calgary will be home again, but she’s certainly open to the possibility.