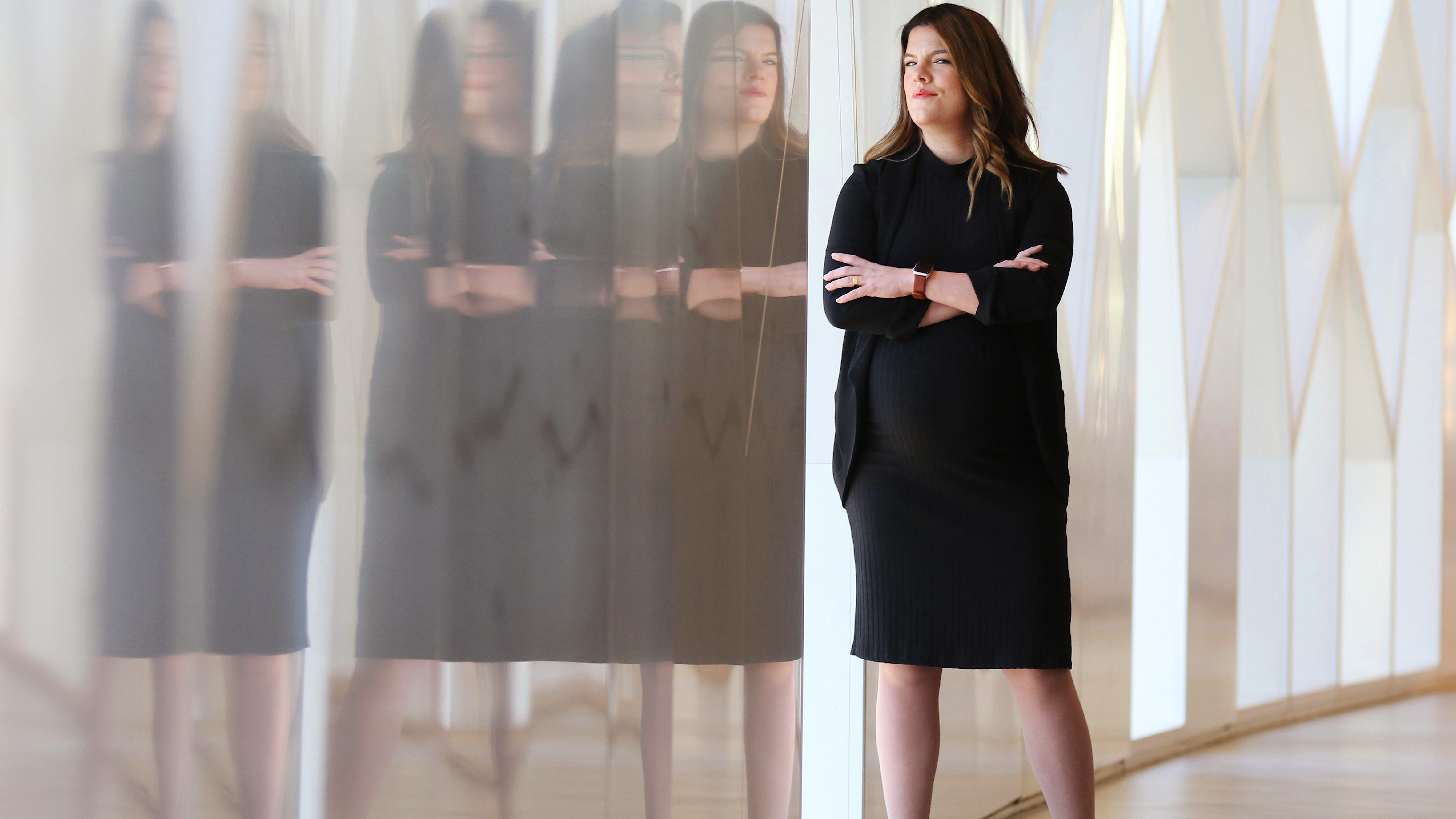 Gillian Hynes poses for portrait at the Central Library in Calgary, Alta. Photograph for the Canadian Energy Centre

As a human-resources professional, Gillian Hynes knows what people look for in a fulfilling career: purpose and passion. And she also knows, from first-hand experience and from watching others flourish, that it’s possible to find both in the energy sector.

Just months after finishing a Bachelor of Commerce degree at the University of Calgary, Hynes was offered her “dream job.” She was hired by Shell Canada as a graduate recruiter, travelling across the country to find the best and the brightest from Canadian colleges and universities, and help them find roles at Shell.

“At 22 years old, it was a great experience,” says Hynes, who is now 34, married and the soon-to-be mother of two, including an infant son who was scheduled to arrive in December. “I think I went to every city and every major university in the country.”

When she enrolled at university, Hynes initially wanted to study commerce. But she preferred social sciences and English to math, so she gravitated toward human resources and organizational dynamics. She could have applied her learnings in any field, but energy was her first choice.

“I had grown up in Calgary, and it’s energy-dominated and energy-focused,” she says, noting that she had spent her formative years in Edmonton, Fort McMurray and Calgary, and that her father worked in quality assurance and quality control in the oil sands. “So, energy was in the back of my mind because I knew it was a sector that had opportunities, particularly if I wanted to stay in Alberta, which I did.”

She began her career at Shell and, several years later, started thinking about pursuing an MBA. When she broached the topic with her employer, they were all for it, even helping to finance the valuable graduate degree. To branch out from her Alberta-based life, Hynes did her MBA at Queen’s University in Kingston, Ont. She continued living in Calgary and working at Shell but did video conferences with her classmates and travelled to Ontario routinely for in-person learning.

“It was nice to do my master’s in a different community,” she says, looking back on the experience. “It gave me a breadth of networking and industry exposure that I didn’t have before.”

Hynes stayed at Shell after completing her degree, grateful for the support she received and keen to keep taking advantage of the opportunities a large company can offer. Her current title is senior talent advisor for downstream business, which is a global role that has her reporting to a manager in London and working with colleagues around the world. Among other things, her work entails succession planning, which lets Hynes participate in shaping the future of the company and the industry.

Another thing Hynes likes about working at a large, industry-leading company is that she gets to travel. She’s been all over Alberta as well as elsewhere in Canada, and to the United States and the Netherlands.

“It gives me a view of other cultures and perspectives and lets me see other people’s views,” she says. “I might not have had that opportunity if I didn’t work in energy and for the organization that I do.”

It’s a point that Hynes comes back to often: The sheer size of her industry and the opportunities that presents. She points out that the energy industry encompasses electricity, oil and gas, coal, liquid natural gas, as well as downstream retail-focused organizations, consulting firms, construction firms and more.

“I don’t think people appreciate the breadth of opportunities and roles that are available in energy,” she says. “You can be everything from an accountant to a field worker to someone doing data science or an HR professional. It’s pretty amazing. You don’t get that in a lot of industries.”

And she should know. Hynes’ role in human resources has her well placed to weigh in on best bets for upcoming roles in the energy sector. Trades and STEM-based occupations will remain in high demand, she says, with robotics and artificial intelligence becoming more important as the industry moves toward automated heavy haulers and drones in the field. But she stressed that the “human capabilities” of critical thinking, strategic thinking and empathy are also becoming more valued, because those are qualities that robots simply can’t embody.

“It’s the fabulously talented people in the industry that excite me the most,” she says. “We have the people who can tackle our energy and resource challenges.”

Speaking of which, Hynes is incredibly optimistic about the future of her industry, which she said is “undergoing an evolution driven by societal demands and consumer behaviour.”

“In Canada, our focus remains on providing energy resources responsibly, in safe and environmentally sound ways,” she says. “The industry is facing headwinds, but we’ve come through those headwinds before. I really do believe we have the resilience, optimism and entrepreneurial spirit to come through again.”